NSL # Rule No. 13 “Its not what you say that gets said, it’s what people think they heard you say.” 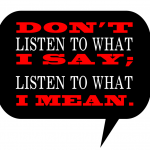 “I mean what I say”- is an expression we often hear. It suggests one is a plain spoken person, and that meaning is just as plain. There is no way to confuse the hearer. if only communication were that simple. We might be in control of the words we use when we tell the story, but that is about all, if even that.

The words we use, even those that seem most personal, are all borrowed, on loan from the language we learned to speak. Of all the human tools we use, words are what we inherit as the oldest things around. As Russian scholar Bakhtin used to say- and I paraphrase- “Be careful of the words you use because you don’t know where they have been.” You are using second and third hand goods. People never hear your words the way you hear them.

Words are the battleground because some words will immediately cause an audience to switch off, move their attention away, check their phones. You have a right to speak. Yes, but they have no duty to listen. We have all mastered the art of politely un-listening. “Yes Dad. I’m sorry Dad. I won’t crash the car again Dad. Blah Blah Blah:”

NSL Fellows will get the chance to speak before their fellows, and the rare chance to speak before members of Congress and other important audiences in Washington DC. Before every major event, the team rehearse and serve one another as a focus group for each presentation. What a fellow learns, sometimes the hard way, is that while it matters what you want to say, what matters more is what you want your audience to hear.

If you hear truth and they hear propaganda or incitement, then you have failed. If your story makes you feel compassion for your comrade dead in war, but that enrages some of your audience who were his victims, you may need to find another story. If they hear confusion and you hear yourself being very clear, you better unconfuse yourself. Sometimes a Fellow will insist that the word or story he uses HAS to mean for the audience what it means for him. But it doesn’t. Meaning is not in anyone’s control. No dictionary ever dictates one word to have one meaning alone. Only dictators try to do that.

NSL is about teaching the trinity of communicative competencies. There is:

what you mean to say,
what you actually say,
and what gets heard.

Reminds of one of my mother’s little stories, about the Sargeant sending the message back to HQ, ” Going to advance, send re-enforcements” and by the time it got there, down the chain of command, it had become “Going to a dance, send three and fourpence.”