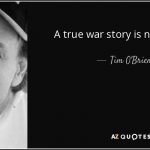 If war’s battleground is not won or lost in the trenches or the factories but in the battle over meanings, then EVERY story is a suspect. There is never an innocent story-not in a family, not in an election, and most certainly, not in a war zone. Never in a war zone!

Someone tells you a story for a reason. It does not matter who or what. That means every book we read, and every museum we enter, we must go knowing that ‘the truth” that is told to us there is never disinterested, never unattached from someone’s agenda. Why spend millions of dollars on a Womens or an African American or a Holocaust Museum on the Mall if not to share a particular view.

Israel and Palestine wage war at the checkpoints and separation walls but every act of aggression or defense has to be armed with a story, to make sense.

One side has “God” on their side, a promised land, an exodus, and an almost apocalyptic event- the awful coming to the edge of racial extinction by the evil design of those who refused to accept their Jewishness as human. The weight of these stories carry so much of the cultural DNA of Western Civilization that evolved from Judeo-Christian roots. When one new nation can harness such story power, and defend itself from critics with the oldest claim to manifest destiny, the war of narratives would seem over before it has begun. Who can compete with such narrative tonnage?

The other side has a God whose prophet visited the Holy Place once on a night journey, but never deigned to give his followers any exclusive right to this or any land. (Bad move) There is no Moses or exodua, no yearly passover yearning for return. The reason is simple. This semitic people, and their ancestors lived and tilled this land of Palestine without any major modern catastrophe till the 1930’s and 1940’s. Then came their moment of apocalypse, brought to the edge of extinction by the evil will of powers that refused to accept Arabs as human. Their exodus was aborted.

They do not look back 3000 years but 70 years, still within living memory. They are still wondering in the desert where bombs instead of manna fall from the sky. The Messiah they anointed got crucified, never to rise again. All they know is Pharaoh and his army still in violent pursuit, and intergenerational exile, still hoping for the waters to part. Most of the remnants of their memory have been paved over with highways and National Parks. They have a story that is always in danger of being obliterated afresh.

So long as this story power remains reflective of the asymmetry of the armies, or economies, the war will continue with one kingdom pulverizing another into silence. But when the oppressed wake up, and determine that their suffering is both their weapon and their witness, they will discover stories to be the final instrument of their liberation.

They will tell stories to bind the world into a coalition of conscience. The people who demanded of the world “Never Again” will now have the world make that same demand of them, and the world will finally turn from the shame of its neglect.