After Leaving Bob’s funeral, the first thing I wanted to do was call Bob! 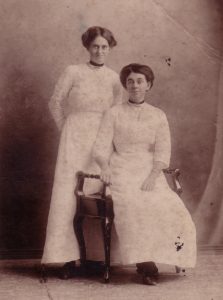 My Dad was the proud son of Irish immigrants to Australia and so, growing up, we had our encounters with our maiden Irish Aunties, Great Aunties actually, Tessie and Lilly. I remember my sister Jenny and myself visiting them in darkened, stale smelling rooms in dilapidated Ipswich mansions, and being encouraged to perform. “Sing for your Auntie Tess.” “Play piano for your Auntie Lilly.” It struck terror in us so stark that it defined the darkness. Why were they always dressed in black? Someone had died, and that is how they remembered their role as mourners, to not smile for a year.

It stays in my then “6 year old memory” as something out of Miss Havisham and “Great Expectations.” But funerals of that generation were as legendary, in the way only Irish funerals can be. One story was Tessie at a cousin’s funeral saying after the viewing, ” I know that Mary’s dead, but can I say, I never have seen her look so alive!” Or at Lilly’s funeral, another of the tribe roving the mourning crowd asking, “Where is Lilly? Not like her to not show up for such a great turn out like this, the buffet and the bar.”  My sister Sue, if I recall, had to quietly point to the coffin, where she told them that this was Lilly’s Last Supper.

It always made me smile and made me proud that I was mad Irish too, and having attending so many funerals in my years of ministry, I sort of understood what death does to the living. Madness and death go together, in strengths dependent on the love that is lost. But little did I know?

This week, my dear, dear, friend Bob died. A brain tumor and a catastrophic fall all in the space of a week and instead of planning the next program schedule for the AmeriCorps program I run and that he founded, we are planning a funeral. It is all happening too quickly for me and Wanda and his family to get their head around. And Bob himself, ever the optimist, hangs on believing till the bitter end that he is recovering, until he wants to know why are all the distant  relatives here? Who are these nurses? At one point, he even asks accusingly, “What is this? A wake?”

The funeral at the local church happened on Monday. Funerals in COVID times are usually remote. Zoom, Zoom, and you are gone. Thankfully, we could meet in person on a snowy Monday morning, and have a requiem mass that for ages has seen off generations of Bobs family, from the old country Italy to the new world of Frederick MD. The consoling thought was that his great grandparents would recognize this ritual of faith that bridges the generations. But it was exhausting. I cried, but some of Bob’s grandkids cried like I never knew humans could cry. Their bones were washed in the deluge of their grief, what the psalmist would have called ‘inconsolable.”

I come home and try to unwind and pray for Bob and Wanda and their loving family and after dinner, I slowly move back into my night routine.  Normality takes over. Who do I call? Without thinking, I start to dial the usual number. 301, 385….

I am calling  Bob, to report on the day, tell him how people are doing, tell him how I am doing because he will always want to know that, tell him what I need right now to get through this, and know he will have some wise, gentle words. He will say, “I am so sorry that I could not make it. I really wanted to be there, but I will be there next time for sure. And I am so glad you went. They really would have appreciated that. And how was everyone? Anyone really upset?” And I would tell him, and he would say, “Yes, they care so much, but can you send me their emails or phone numbers. I will call them next week to offer my condolences. You know Paul, this really matters and you are doing the right thing. So, I am sorry if I let you down, and I feel so bad, but hey, next week, come out and me and Wanda can meet at the Italian place we usually meet at, and I can catch up on all the other stuff. You are doing a great job, and I appreciate all you do, even when others don’t sometimes. How are Ben and Tess and the kids.? How is Ahmed? Say Hi to Karam. Give them my love.” 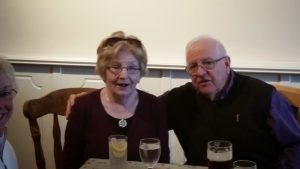 The phone did not answer, and yet, as I quickly realized this habit had suddenly  outlived its use, I allowed myself to walk through the routine of 20 plus years.  If I could just call the operator for Bob’s new number, I know I would have had exactly the same call.

My telling you this story makes me feel like I am Auntie Tess or Auntie Lilly at an Irish funeral, and that there is not a lot separating  death from madness. Sometimes, it is the madness that honors the death more than the sanity. Those prescribed  5 stages of grief, letting go and moving on don’t include moments of insane comedy.

I have to add that Bob did not look the most alive I had seen him in the coffin. It was clear he had gone, except for his Micky Mouse tie. And Bob would have been disappointed that there was no buffet and bar, but rather masks and hand sanitizers and a snow road home. Come the Summer and Vaccines, we will do that party yet. But not now.

So yes, when I got back from Bob’s funeral, the first thing I wanted to do was call Bob. And to me, that underlines how profound the loss. Bob had become the Listener that we all need, someone who though not family, is privy to the inside because his love and trust invites your honesty in ways that you hardly experience with your own kith and kin. Bob invited intimacy from so many different folks that I wonder if sometimes he felt overwhelmed with the role people asked of him. But he never complained. Just supply the right pasta and the proper Vino and he could turn any catastrophe into a party.

I know that some religions are wary of Catholics praying to the saints and lighting candles before the Madonna and they think that it is idolatry. But maybe they have never known the sort of grief that springs from such a depth of love that the conversation never ends, and that death is just a bad connection. 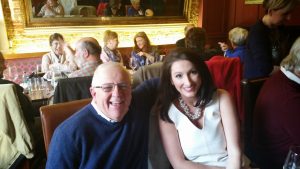 My futile phone call to Bob Monday night are transformed tonight into my prayers. My T-Mobile account does not have a strong enough 5G signal yet to get him on the line but I know this- He is listening. And that is where Bob will never die, for his family, for Wanda and Tony, for Karen and Lisa, for Connor and Jake and Katie and Francis, for all the extended family, for my Alpha community.

Love is being on call, even if you are dead, and sometimes, as weird as it sounds, it is the memory of our beloved who are dead that will keep us alive. Bob remembered the mother he lost as a little kid and he made her stay alive.  And so he must continue to make us come alive. His departure does not mean he has quit from doing that.

Let me find his new number. If no one picks up,  leave a voice mail and wait for him to answer in the new day you step into. The best way to celebrate those who have died is to live. How insane is that?