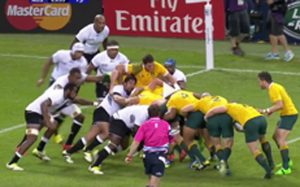 I was watching the start of the 6 Nations Rugby over the weekend and enjoying both the art in the force and force in the art. it is a brutally beautiful game. Like a war but no one gets killed.

One of the most amazing parts is the maul,  when France had the ball  and was pushing towards the English try-line, with the White jerseyed defenders peeling off and regathering to resist Le Bleu’s moving scrum. Pound for pound, the pack of forwards are equally enough matched in most cases, but when you watch a winning team drive their opponents back, you would think one side must be so much heavier to muscle their way so tenaciously. That may be part of it. But that got me thinking. What was the difference?

-One team had the ball and the other did not.

–One team had field positiion to see the try line, and the other was on the back foot.

That seemed to be a perfect illustration of what we teach when we train people in the principles of narrative design. The core insight of this method is to assert that who you are is about where you are- and that energy is a condition of position and posibility. What you can do from here is dramatically different from what is possible from there. Ask a runner in a marathon with a mile to go. Ask a quaterback on the 40 yard line with 7 minutes to play.

You never see a rugby team try to maul a ball out of their own try line. As soon as they can, they will kick down the field. The risks of a loose maul on your tryline are just too great. One dropped ball and your opponents are likely to score. You want to play the game in your opponents territory.

And how often do you see a tackling side attack the ball with the same vigor as the attacking side? Of course, the best teams show us that. New Zealand 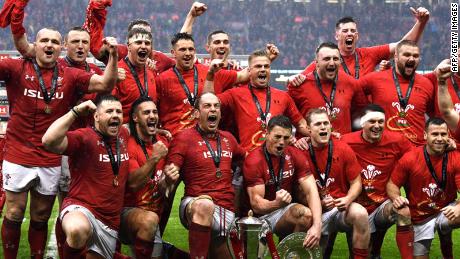 often makes its defense into its most attacking weapon, because a strong tackle prises the ball loose, or sidelines an attacking player.  Their ceremonial Haka is meant to intimidate their oppoents even before the ball is in play. But having the ball and having the position where the end is in view, the try is within reach, seems to make all the difference. If you don’t have the ball and you don’t have field position, not a good plan to launch any ambitious play. And as I tell myself that, sounding like a rugby coach, I realize that I am also talking to myself about something else.

ISRAEL PALESTINE AS A RUGBY GAME UMPIRED BY THE USA 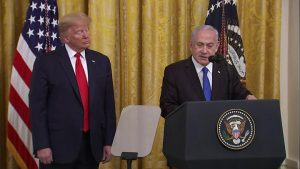 These lessons of rugby are speaking  most eloquently to the field of work I have labored long and hard in for these past 11 years- the quest for Middle East peace. Shall I now compare Israel and Palestine to a rugby game? Shall I compare thee to a summer’s day? Why not?

For some of us rugby tragics, Rugby’s records are as revelatory as the Bible, especially when Wales wins the Grand Slam with Jesus Evans playing fly half and Moses  Jones at full back. Certainly this was so for my Mom and is so for my Welsh cousins.

Diplomacy and leadership is all about position and power and how to move the ball down the field.  With the Trump “deal of the century” announced last week, people in my field of work are forced to reassess. What went so totally wrong? To end up with a peace deal that seems so reminiscent of the Peace Deals we delivered to the Native peoples to placate them long enough to steal more of their land, or what Chamberlain came back with from Hitler boasting “Peace in our Time.” Hitlers offer was his final insult.  When we translate “peace deal” into Orwell’s Newspeak, “Peace is war” and “freedom is slavery” this deal of the century beciomes the “dud of the deluded.”

If it were a rugby contest, Palestine has never been in a position where their goal of nationhood was in site. And at every negotiation, the goal line shifts further and further away, beyond their grasp. And Israel and the USA have always had the ball. In this game, USA is the self-appointed referee and Israel is the sole  contestant. Imagine if a referee only gave possession to one side?  Imagine if every penalty was against one side? Imagine the touchline keeps expanding, and the ball can never go out of bounds for one team. No borders rugby is what this game resembles. Nothing would make a Rugby fan more furious.

But in this game of realpolitik,  all this rings  true. Before every negotiation, the USA has signed off on Israel’s position and Israel  has signed off on the USA position, to keep the Palestinians in the dark.  Starved of possession, what does any team do? Look at 6 Nations. It gives up, it retreats from positive play, or is booed off the field. Resistance becomes fouls and high tackles and violence to steal back the ball and if that fails at least steal back some pride.  Its off side and hands in the rucks. Intifada could be the story of a failing rugby team. This is the game of farce that the current peace deal presents.

Not that its a new game. Obama and Bush and Clinton played it with more subtlety and panache-=better coaches- ( probably from new Zealand) But it is all part of the great game  of Empire that the British invented, just like their rugby or cricket as a colonial game. Steal the land, grab the ball, dominate the  forward positions, corrupt the referee so you can change the rules, and as Trump would say, win, win, win, in fact, win so much that America will get so sick of winning.

Who thought that the 6 nations would have anything to do with Trumps peace deal, but even the name has an echo. In Paris, rugby crowds were cheering the Six nations while back in Washington, with Israel and Trump and their Arab acolytes,  we were watching another episode of the Sick Nations. Sounds like a rock band, Sicko and his Sychophants.

Israel may have won the Grand Slam and the Triple Crown but when the referee is exposed as corrupt and the boundary lines keep bending to take in another settlement, this team  perhaps will  wake up to how pathetic their game is. They will realize that they could not ever win on their own merits alone. Their victories are all humiliations  because they only win games that are rigged.

All of this may be my weekend fancy, one metaphor too far. Yet if you watch “Invictus” and how Mandela adopted a white supremacist rugby side that could win a world cup,  you can see how rugby changed  South Africa and changed the world. It is not such a bad metaphor.

As the British used to say, “Play up play up, play the game.” But when the game is fixed, then game becomes war, and no whistle on play is going to stop that. Palestine needs a New Zealand coach, to make defense more scarey than attack. They need a Haka to replace the Two State Solution phoniness.  Right now, all they are doing is vacating the field. But if the referee declares the whole team off-side, what are they supposed to do. Sack the referee for one- They did that. And leave the field so that Israel is playing with itself. That’s a rather indecorous image of BDS, but it fits Trump and Bibi and how they play ball.

This all reminds me of a childhood memory, a famous rugby match known as the Battle of Brisbane when the Lions front rower ( he was Welsh I think)  smashed his opponent in the first scrum, breaking the Aussie’s nose and teeth. The Lion was sent off but when asked what got into him, he said it was a no brainer, that when you play Australia, you have to retaliate first. That is about as equally indefensible as Israel’s winning strategy-occupy first and then ask for a deal. Make the deal totally unreasonable, blame the rejection on Palestine and take more land.

In the Battle for Palestine, the referee needs to be impeached, and have a brain bypass and a whistle transplant. The whole Israel team deserves to be sent from the field of play. But that won’t happen till the field of play is taken from Israel. If it worked for Apartheid South Africa, it can work here.

This weekend, after Impeachment, the verdict, the State of the Union and Iowa Circuses, I mean Caucuses, I will be so happy to swap the Sick Nations for the Sick Nations. 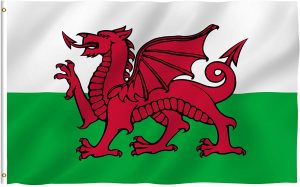