As Another Year passes into History- Living Stories revisited

“Living Stories” (LS) is alive and well and more powerful than ever.

That was the conclusion we came away with last Friday when 50 members of AmeriCorps programs from across Maryland met to share their stories of service.

WHY THE SURPRISE?
Having invented this practice 25 years ago, we tend to assume that in this story-savvy 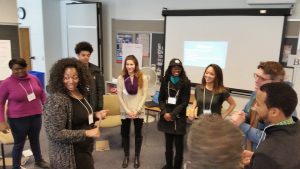 world, such a workshop is not new. Everyone knows about story circles. Everyone  is being taught to tell their stories. So what is it about Living Stories that always surprises? 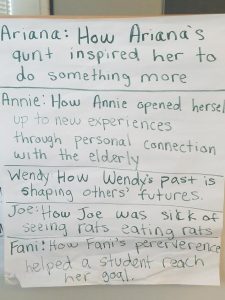 POWERFUL STORIES
The stories that are shared in the plenary session are always powerful. People prove to be incredibly open and vulnerable. The day is so full of energy and engagement. Pablo, our co-host at Casa and myself observed that it’s like opening the valve of a story hose. People immediately want to meet and tell. But this is all the obvious stuff.  Something else is going on here but it takes some post-mortem reflection to understand what it is.

IT’S ALL ABOUT THE LISTENING
It is the quality of the Listening. That is the invisible mystery that perhaps we have not factored enough into our work and something that  has not penetrated deeply enough into our story community. What LS seems to do better than anything else is create a Listening Culture that ellicits the most powerful stories in the room. These stories are nothing like the spontaneous tellings that occur in our everyday conversations. They are tellings that grow with repetition because the listeners are invited into their co-creation. My colleague David Hutchins calls them Twice Told Stories but on Friday, they became Thrice Told Stories because the power resides in the iteration.

STORIES GOING THROUGH STAGES OF LISTENING
The small groups designate one story to go forward with the imprimatur of the group and then load up that storyteller with feedback on what worked. Then two groups caucus and hear the two stories and give feedback as to where the power in the story is coming from and give their imprimatur for the next telling of the one story chosen. Then four groups join and listen to two stories and the process is repeated.  Every iteration of this staged listening process gives that story a new level of intensity and purpose. By the time the stories of each group are told to the whole group, the listening space has been shaped and reshaped into being more powerfully receptive, all because the stories have created the listening, and the listening has created the stories.

EARLIER RESEARCH
I recall an essay “Story as the Shape of our Listening” which I wrote 20 years ago when this insight emerged from our practice at the Center for Narrative Studies. Back then, we were so focused on attending to the telling that we missed the hidden listener to every story- the teller herself. 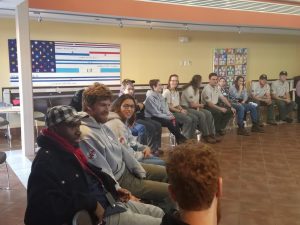 We tell our story and hope that our audience will show enough interest to engage. We judge success or failure by the tangible signs of that engagement. Did they laugh, did they clap, did they ask questions? Did they cry? What we as tellers are doing here is listening to the listening. But what we don’t factor in to the experience is that we as tellers are also one of the listeners. The vital one, in fact.  We act as both teller and listener. As most accomplished story artists know, the secret is to do both at the same time. One has to listen to the telling in order to effectively tell into the listening.

TELL THEM ABOUT THE DREAM
One of the most powerful examples of this is the MLK speech in 1963 when at the end of that long hot afternoon, King seemed to stumble over the tortured syntax of the written speech and the crowd seemed to be growing restless. The famous Gospel singer Mahalia Jackson who had sung “How I got Over” just before the speech  knew how to read an audience and leaned across to whisper to King, “Tell them about the dream Martin, tell them about the dream.” King immediately lifted his eyes to the heavens and began to address the crowd rather than the text. He allowed the shape emerging from the listening to shape the emergence of his telling. He had to go off-script to speak into history. 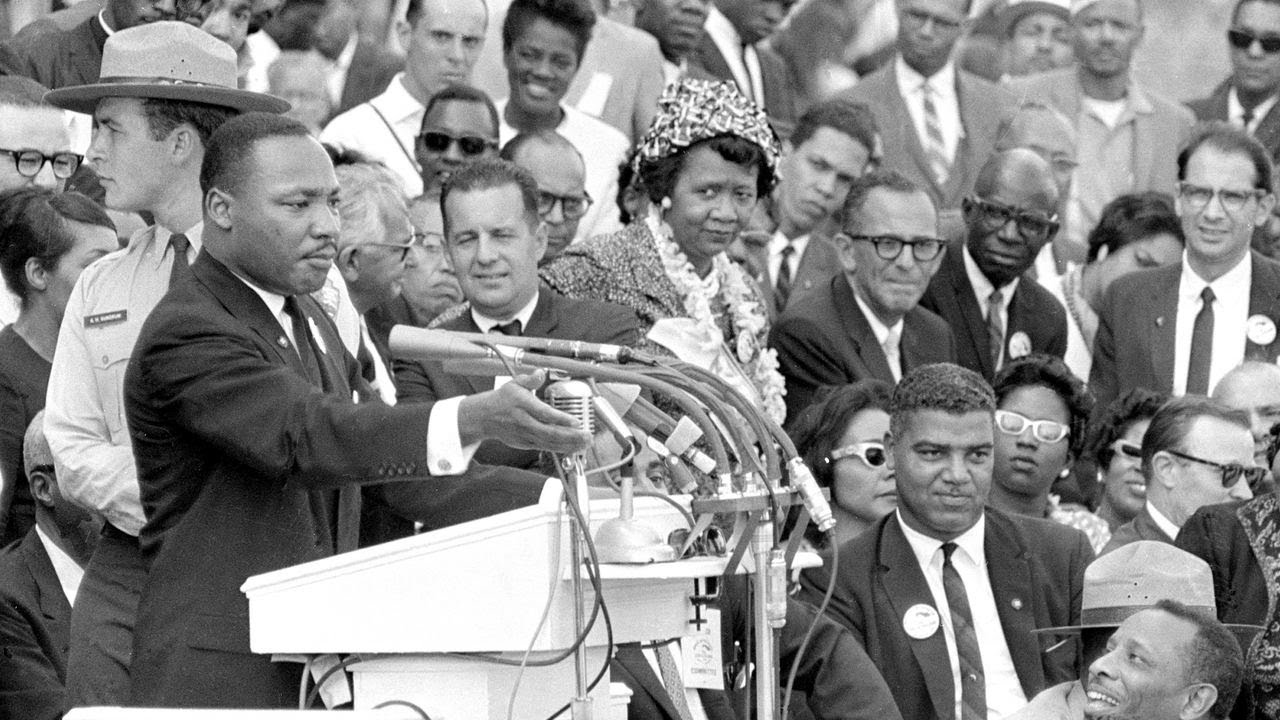 I love watching the Video on YouTube because you can see King throw his head up as he leaves the text, and freewheels into those memorable, sermonic words of “I have a dream.” But they came out of the listening. If you are not listening to the listening, you
are in danger of conducting a dialog with the deaf. 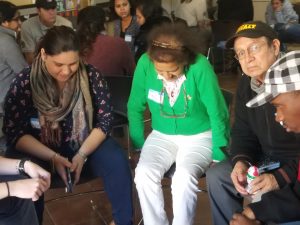 WHAT DOES IT MEAN
But it is more than just this process of the performance that matters.  It also works for interpretation. We tend to listen and interpret what we hear ourselves say as fitting our dominant paradigm of perception. That means that the sad victim story we hear ourselves tell is heard by us as the ongong proof that life is unfair or the system is rigged. We share stories of our problems and hear them as proof that most of life is a problem. If we have a tragic sensibility, even the happiest moments are told under the threat of storm clouds. We love stories of defeat snatched from the jaws of victory.

If we tell our tale of travail and our narrative DNA belongs to the sunnier disposition of ” Things work out for the best in the end,” then we will hear our tale bearing witness to our sense of how the world works. Even in despair, we will hold tenaciously to hope.

We discovered in some of the early sessions developing the Listening Lab- Narrative Room the story told  by our teller was often echoed in the larger story of how she made meaning out of it. A sad story is heard tragically. A romantic story is heard optimistically. An ironic story is heard with a certain amount of cynicism. This is listening that goes with the grain, and one that allows the story told – to shape and re-enforce how the story is heard. Any good storyteller wants that, to have a say in how the story gets heard. It means a story is locked inside a story. One gives meaning to the other.

WHAT IS THE WORK OF CHANGE?
That means we need to change our story of change.  It means “changing the story” ends up being less about  the way the story is told and more to do with changing the way the story is heard.  All around us, we see signs of how this keeps happening, whether it be the symbolism of the Confederate Flag or military monuments,  the story of the Vietnam war, or how we understand marriage in the age of Me-too and Gay rights. What changed was not in the giving but the receiving. And if we delved deeper, we would understand something else is going on, something else about the power of a story to change. It may mean that  the most powerful effect of a story is not how it changes the telling but how it changes the listening.

STORY POWER AS LISTENING POWER
This insight challenges what we thing about power and our complicity in our own subjugation. For what if the listeners are the final arbiters of meaning? What if, in this age of media overload, we discover that we have much more power than the tellers do.  What sort of empowerment would that lead to?

It means we can listen against the grain, or turn the tables and subvert the teller’s intentions completely. We can refuse to be captured in the story that someone tells us to divide us, to imprison us in rage or silence us in shame. We can refuse to give power to the stories that want us to hate all immigrants or the stories that want us to think that every politician is corrupt or every person with wealth is rorting the system. We can start a rebellion- from where we sit.

SILENT REVOLUTIONS
History is replete with silent, leaderless revolutions that began when an audience finally walks out on a story. And it is happening all the time. Look at Hong Kong right now. Look at Iraq. Look at Bolivia.  Even at home, our leader appears in public expecting to be cheered and is booed.  That could be the sign of a story shift. When the naked emperor walks so his gowns can be admired and a child screams out “The emperor has no clothes,” that is someone witnessing to truth cracking power’s mirror of self-delusion. It happened in 1989 in Berlin when the wall was treated more as a joke more than a threat.  Meaning shifts,  the world shakes, and those in charge are not in charge anymore. Refusing to listen, or refusing to interpret the story in the orthodox or politically correct way, and being the heretic- that is how to start a revolution.

Institutions of old trusted their power because they could assume that people would pay attention. Even outrage was a sign that people were paying enough attention to get mad.  The real sign of revolution was not protest but cold indifference. When no one cares enough to care, then the game is up. When an audience migrates to a different set of meanings, the old story dies because it no longer makes sense. That becomes the new weapon of social change, to shift the way people take in the world and to expose the old shibboleths as errant nonsense. But to do that, we have to shift our attention to where the real power resides. 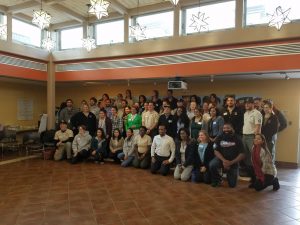 Apply that to how you hear your kids, or your aging parents, or how you hear the political debate or the impeachment inquiries. People think that facts might sway us, that once we realize that the leader did this or that, we have to sign on to condemnation.  But if my story is paranoid,  that they are all out to get him, then no army of facts will be able to batter down that defensive wall. Nothing will change. In fact, all the efforts to change someone’s mind will backfire and prove the opposite point, because the story we listen through has innoculated us against all these counter stories we know we will provoke and  have to endure.

So take a note, all you social activists- determine the story that people are listening through, and focus on changing that. Even if the original story does not change, it changes radically when we hear differently. So, its all about what we create with how we listen.

We seem to have travelled a distance from Living Stories that we started with, but the practice continues to deepen as we deepen our understanding of the power it seems to unleash. And it continues to help us understand that while Living Stories is about making stories come alive, the real resurrection happens in the Listening because therein lies the force of any story’s enlivenment.