When the Emperor never laughs- Its time to get serious!

The Emperor has no clothes” is a well told parable reminding us all to beware of pride. When we think we are the belle of the ball,  the star of the show, the main contender, we are, but not for the reason we think.  It’s Han Chrisitan Andersen’s story of how a king turned himself into one big joke, making himself the laughing stock of his people. Their adulation was a scripted part of a Saturday night Live sketch,

But what about an Emperor that never laughs? Sure, our President mocks and sneers and does impersonations of people with disabilities and he revels in cheap jokes about  women, the Fake news and his predecessor in the Oval office. His signature joke was that President Obama was born elseshwere, and recently, he tried the “disinfectant and light” joke. But everyone took him so, so serious. What a dilemma- a waste of sarcasm?

If we were tasked to edit one of those little books entitled “The Wit and Wisdom of President Trump” what would we select? Make America Great Again-of course. Then the inaugral address had the word “carnage” and that was unusual. Other sayings like (On Puerto Rico) ‘This is an island surrounded by water, big water, ocean water.’ might make it, and who can forget ‘I think I am actually humble. I think I’m much more humble than you would understand.” There would be  plenty of adjectives and adverbs like “winning” “weak” ‘losers’ and “winners” and “stable genius,” and ‘covfefe.”

Where is a ‘bon mot’ like JFK’s crack about Washington DC  “A city of Southern efficiency and Northern charm.” Or there was LBJ “Making a speech on economics is a lot like pissing down your leg. It seems hot to you, but it never does to anyone else.” Or George HW Bush who once said “Fluency in English is not something I am often accused of.” Or if you watched the Sunday interview at the Lincoln Memorial, did you notice the smile on Abe’s face? Now there was one funny man, even if he saw the nation savage itself apart and had to sew it back together. 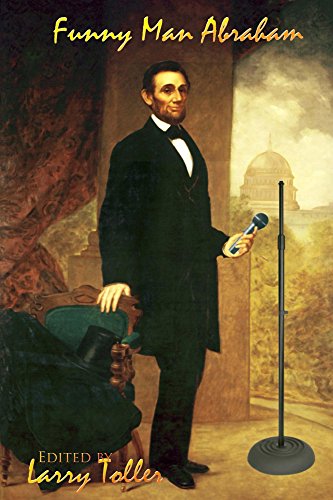 When someone accused him of being two faced, he replied “If I had two faces, would I be wearing this one?” Lincoln was the Jokester President, disarming his opponents with an aphorism or a funny story.  He once asked Geneal McClelland if he could borrow his army for a bit, since as Commander in Chief, he did not seem to be using it. What quip would come from from his lips for our current carnage?

You can be sure it would be funny and withering, just like he summed up the pro-slavery arguments of Senator Douglas after a debate “as thin as the homeopathic soup that was made by boiling the shadow of a pigeon that had starved to death.”

If there is one thing that the last three years has taught us, our President is deadly serious. Right now, that might be appropriate. but what does it say if a President shows no sense of humor.  Humor is the high road to sympathy and humility. It has a remarkable power to humanize. Those who use it best use it to enrol themselves and their audience in one shared reality of human folly, mishaps, joys, sorrows, mistakes, embarassment. Humor invites us all  deeper inside the human predicament, but especially leaders who use it to step back, to appreciate the wonderful absurdity of life, and their own contributions to it.

But how does one make humor if you never do anything wrong? How do you invite laughter at your foibles and failings if you believe you never fail or falter. You are a stable genius? Humor is a trait of mere humans. Angels don’t need to laugh. Nor do devils.

If a candidate for President has no experience of being in public office, or has no grasp of the intricacies of economic policy or foreign affairs, we will tend to disqualify them. But any candidate who cannot tell a joke to save his life, who never revels in his own absurdity and the madness of the times in which he is called to lead, is an even more dangerous prospect.

That brings us back to the naked emperor story. Perhaps for all these years, we have read it wrong. It is not the parable of the king who makes others laugh at his majectic self, it is actually the parable of the King who cannot laugh at himself, and therefore, cannot laugh at all. Right now, as we face into the crisis of more infections and death, we all want to ask the big question- This is all a big joke-Right? But the joke is on who? The King for being so nakedly umprepared and nakedly ambitious, or us for cheering him on through our masks and respirators?

What if President Trump does not need to make jokes at all because he knows better than we do, we the American people are the joke. And the reason he never laughs out loud  is because inside, he cannot stop laughing at how stupid we all are.