Christmas Eve, that first year of the Great War of 1914, darkened cold and slow, and the sounds of human voices other than the cries of pain drifted across No Man’s Land.

The German lilt of “Stille Nacht” was unmistakable to the Allied troops. They wondered if the Germans were planning some new trick. Was this a ploy to distract their exhausted defenses? Yet, the Christmas Carol was evoking that same longings for home. Both sides were missing their loved ones on this most sacred of nights. Almost without thinking, they started to sing along in English, and their ” Silent Night, Holy Night, All is calm, All is bright” blended with other German voices, and seemed to sound a gentle benediction over the wounded earth.

Next came the clear shout of a German soldier saying in English “Come over here. Come over here.” The British replied, “We will if you will. Meet you half way.” Slowly, heads appeared, and then shoulders, then bodies so used to ducking bullets, scrambling over the parapet clutching cigars and bottles of liquor, ready to share a toast to this surprising punctuation in hostilities.

of Flanders in and around Ypres, but the story of the Christmas Truce loomed large in memory.  It stood for the experience of normal soldiers, forsaking national enmity, disobeying military orders, to act out of their shared humanity and common decency. It never happened again. Commanders forbade it. As the war years waged wearily on, it represented that forlorn hope that there could be a way for the ordinary soldier to halt the slaughter.

In one field outside Ypres, the soldiers decided that they would extend the truce into the morning with a game of football. Someone improvised a ball of sorts and a nearby field was chosen.  The Allies and the Germans lined up for a friendly game. The Allies reported they won 3-2. For that brief moment in time, the world became safe again for a Christmas celebration and for a game of football.

The fact that we remember this story so fondly is a deeper sign that even amidst war, our quest is not simply for peace. We want more. We need human fellowship. We want to celebrate. We want to party and play. We long to be kids again, because the folks who know best how to do these two things are children. Party and play come natural to them.

That is why this April, a program that came out of Gaza’s wars is hosting a special re-enactment of the Christmas Truce outside Ypres on April 3rd of this year.

Gaza? I hear you say? Why Gaza? In 2014, Israel’s bombs reined down on innocent

civilians and among them were a group of youth watching a semi-final of the World Cup, Argentina v Netherlands. A few days later, a group of kids kicking a soccer ball on the beach in front of international journalists were blown to bits by Israeli shells. The first group were having a World Cup Watch party in their local Cafe. The second bunch of kids were just doing what kids do, playing with their mates on the beach.

The world did not much care then or now about the death of Gazan children, all 547 of

them. But the world does care for football.  Passionately so. And the world remembers how in 1914, soccer became the mutual respite from war.

To mark 108 years since that Christmas Truce,( a little early I know) and 8 years since the four Bakr kids were massacred on Gaza beach in July 2014,  and the 100 years spanning these two solemn events, Gaza Plays Peace director and Founder, Loai Ahmed is taking a group of children and families to Ypres to re-enact that fateful moment of peace amidst war. Loai wants to send a message- now is the time that we all work together to make the world safe again for children to play, for children to celebrate, and be allowed to grow up in their innocent joy. 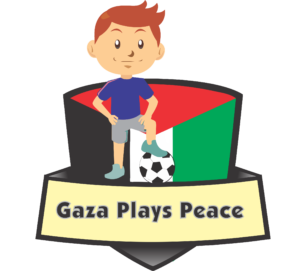 Loai is a soccer player himself. While studying at Gaza University, he played as a Junior for Palestine and he has worked with Medecins Sans Frontier and Save the Children to help kids deal with the ongoing trauma of war. He is quick to point out that what we call  PTSD, Post Traumatic Stress Disorder, does not exist in Gaza. After 4 wars, nothing is Post. War remains always a Clear and Present danger. Proof of that is last May when 11 kids on their way to Trauma treatment were killed by Israeli bombs.  Loai’s own soccer coach was killed in the 2014 war. But Loai is on a mission. He wants to come to America to speak on behalf of Gaza’s children and children everywhere, from Kyiv to Khartoum, from Kabul to Krakow.

The same weekend, the Gaza Plays Peace team in Gaza will meet for the first time since COVID to reconnect and train and learn about the Christmas Truce and the re-enactment and then, they will take to the beach to play a game. Head coach will be Loai’s brother Mohammed and Team manager will be their Mom. 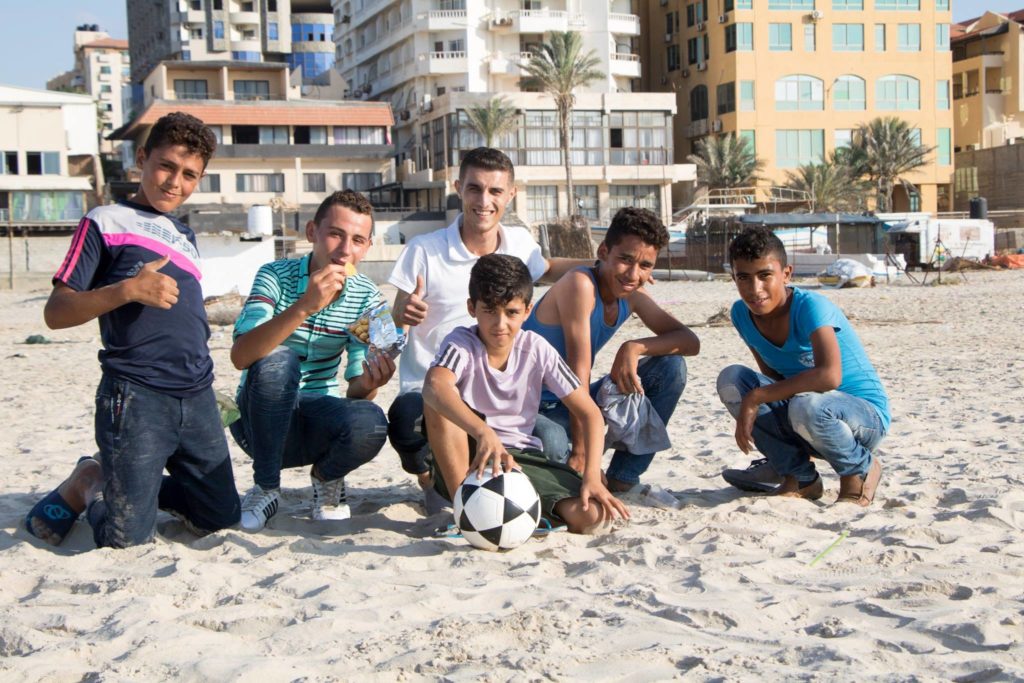 Loai wants the children of Gaza to link arms with those war weary soldiers of Ypres, those enemies who managed once to step beyond their fear, and meet on a field of play, not a field of battle. Losing means you shake hands, not lose your life. Winning meant you won the cup, not occupy or lay siege to someone else’s land forever. If Gaza kids can take the lead, then Ukraine can play peace and Russia can play peace, and Syria can play peace and Yemen and Palestine and Ethiopia and Afghanistan.

Right now in the USA, we seem to have a Government that does not want to stay on the sidelines of a terrible war. We have a leader who aspires like all presidents to be a war time President, to  lead when it matters most. But Gaza Plays Peace wants to send a message to him also. The USA has to learn to play peace. Our kids demand it no less than the children of Ukraine and the children of Gaza.

The Christmas Truce does not have to be an aberration. If it can happen at Christmas, it can happen at Easter or Passover too, those feast days where it is sacrilege to kill. Loai is from a Muslim culture and for him, April 3 has another special significance. It is the beginning of  Ramadan- a time the Koran says is for fasting from hatred and war and fear. 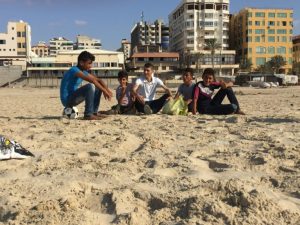 If human beings did the decent thing, if human beings realized that children cannot be, must not be sacrificed to the delusions of grandeur that Emperors and Czars, Kings and Presidents alike share, then the future-our kids- have a chance. Gaza plays peace is calling for an Easter-Passover- Ramadan Truce to match that first fateful Christmas truce, and one that will last. Mr. President, in the name of the children, study war no more. Play for Peace.

“Let us make the world safe again for kids to play,” declares Loai. “Is that too much to ask?” 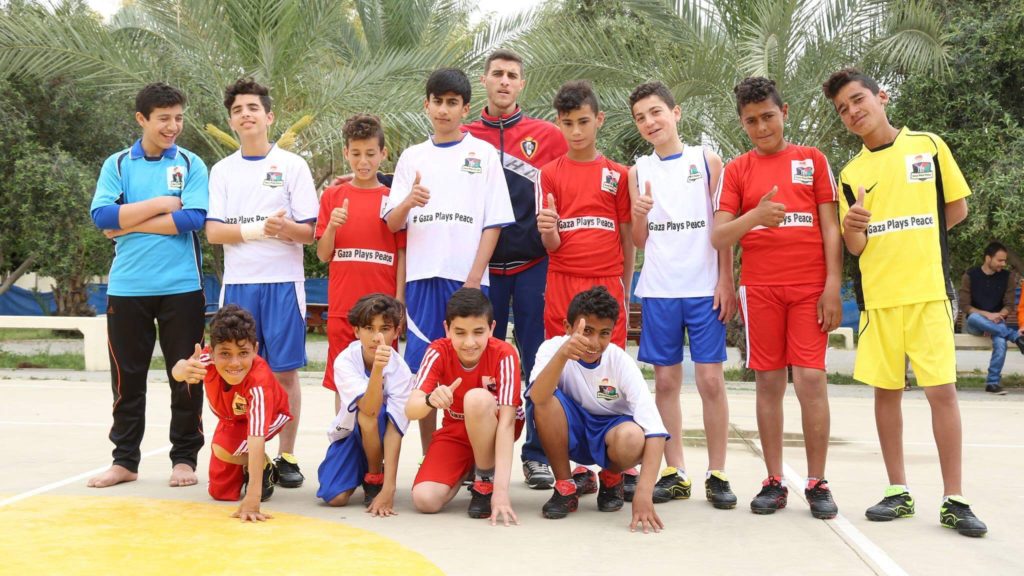 If anyone would like to help Loai and Gaza Plays Peace, and help fund April 3 and further activities across the world and in the USA, you can DONATE to Gaza Plays Peace at SOS Inc its American based affiliate.